Behind the Scenes on a Digital Illustration Shoot

And Then, Christmas, Entertainment Photography

The Holiday Studio Promo card shoot evolved over the course of a month or so of preproduction, starting with some brain storming and research in the fairytales section of the library.

A quick search of the net and a few phone calls later, I was able to procure a quite beautiful, relatively light weight, small slipper tub from Republic Plumbing in Quincy (Thank you, Bill Duggan and Tom Gunning!)

The shoot itself took place in two places. The first was the studio shoot with the two boys in the tub and the presents separately. Then we took off down to Hull Gut on Nantasket for the waves. We happened to get lucky and there was a storm off shore that was kicking the waves up, plus giving us some great clouds for the composite.

The music is Where or When from Daniel Ian Smith.

Let’s talk about your next marketing project! 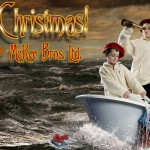 The Most Fabulous Show Promotion Poster