I Dream of Genie in a Bottle -Jeannie? is that you? The Genie in the Bottle. This little shoot was inspired by Barbara Eden’s character in the 1960’s (and timeless) I Dream of Jeanie. The show only ran for 5 years, but has had an impact on pop culture that has lasted much longer! Heck, I wasn’t even born when it started.

I have always heard it said that it is important, as a creative professional, to exercise and stay in shape. Mentally, I mean.

So, periodically, I will put out a call to the network of people I know and ask for a volunteer to come into the studio for some play with the camera.

This time I decided to start a new series of portraits of people in their own costumes.

Samarra is a belly dancer, who prefers movies dating back to before the 70’s. So, her costume is also her work uniform. And, she channels Barbarella occasionally.

Hey Actors! Got a character that you really identify with (like, I Dream of Jeannie here)? Got your own costume?

Wanna do a fun shoot? Get in touch! 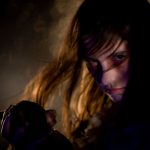 The Lilith Portrait Sessions – The Start of the Dark Portraits