Story X – The Whys and Wherefores… The idea to create a graphic novel has been with me for a little over 10 years. I have always been inspired by the work of illustrators and how they can convey a concept in just a few lines. And, they can continue the story, and concepts, over several frames, or even a whole book.

Photography has certain limitations, at least in my head, about too much detail. An individual picture can stand on its own and there are so many different interpretations that can be made from it, depending on what your individual eye gravitates toward. Putting a series of images together usually falls into the world documentary or journalistic work. It can provoke a reaction, but doesn’t usually spur your imagination the way a graphic novel illustration can. Or, photographs get put really close together so that you can only concentrate on one concept at a time. It is moving too fast for the individual details in the scene to be a problem. But, that is the literal definition of a movie.

My goal was to distill the details in the image enough to tell a story over several frames.

While I have several of my own scripts I am slowly evolving, I collaborated with Rick Chandler and had him write this one. We had talked about backstory, tension, peaks, etc and decided that it would be more interesting to come into the story in the middle. Hopefully, my audience can find something in one of the characters that resonates with them and they will be drawn further in. At that point, they can make up their own backstory as to why the characters are in conflict.

I also wanted to limit the project to one page: to create a (photo)graphic short story, rather than a full blown 45 page graphic novel. Partially, it had to do with what I knew would be an massive post production process. And, partly, because I had always like the idea of the ability of short stories to convey an idea in only a few scenes.

As for the design esthetic, I have been creating a portrait series over the past two years, simply called the Dark Portraits. They are the antithesis of the generic headshot and take a lot of influence from early Cindy Sherman and Gregory Crewdson. The idea behind that series was to reduce the background to a hint of a location, without it being too generic or too specific. It was more important, to me, to let the subject and the audience read what they wanted into it.

Story X’s esthetic was an experiment in pushing that background further than I had ever done before.

The audience vote on what the final frame should be was an attempt to satisfy my curiousity about what people were bringing to the series. As of right now, people have voted that she should win the day. However, and to my surprise, the second place vote has been for a draw between the two of them.

My final goal for this work is to explore the commercial applications of this style of work. What kind of marketing project could leverage a (photo)graphic novel?

You can check out the original (photo)graphic short story here: https://mckeephotography.com/2012/story-x-win-lose-or-draw-a-photographic-story/

behind the scenesstory X
Related Posts 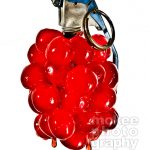