Our Town poster production – Ode to Norman Rockwell, with Photography

Location photography for the Our Town Poster Production, or any photography that starts with a plan (doesn’t yours?), is a constantly evolving process, starting with the back of the napkin, pre production planning, scouting, and continues right through the final product, whether it is for a poster, brochure or web graphic.

The conversation for this project started as we were wrapping up the Cat on a Hot Tin Roof poster for the Riverside Theatre Works.

Stephen showed me Norman Rockwell’s After the Prom as an example of an image that talked about some of the same subjects that Thornton Wilder’s play, Our Town, covers. 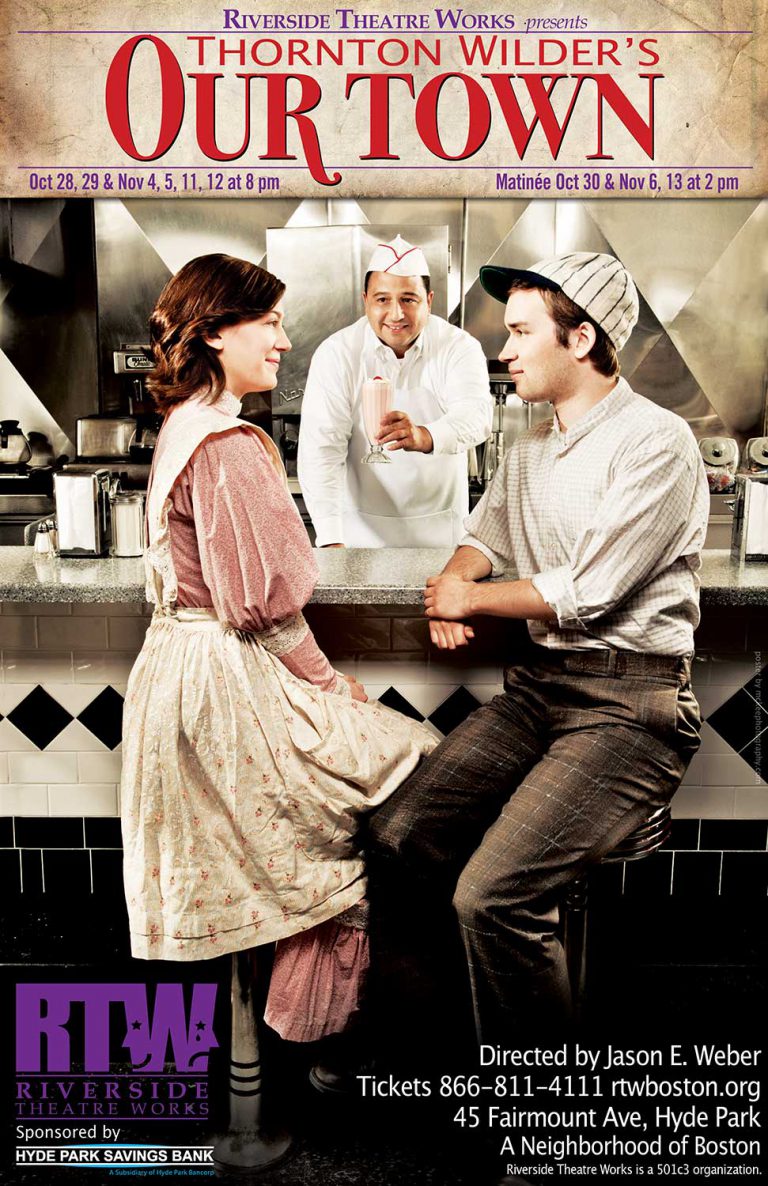 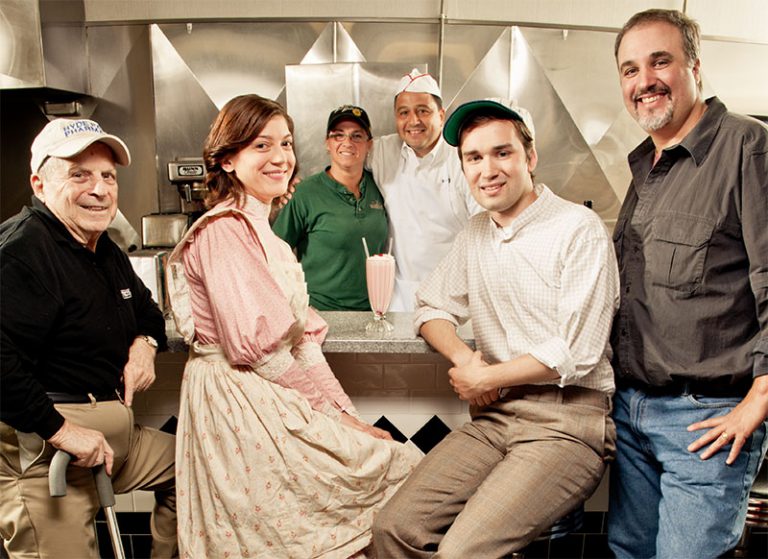 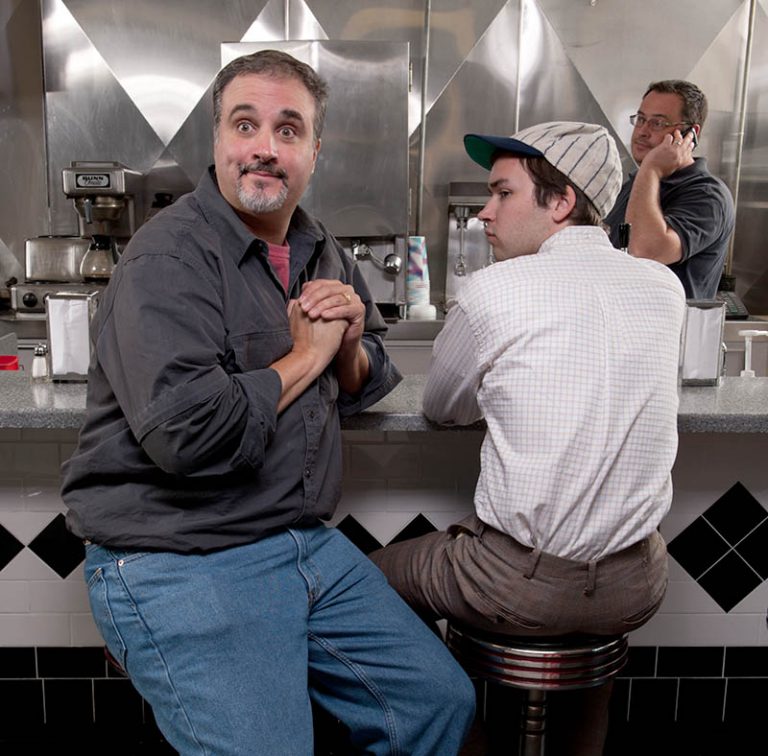 "Please, Sir. May I have another light?" Lighting Test

We knew we had access to the actors and that, according to the play’s tradition, local politicians often play the role of the Stage Manager for marketing materials for the production.

Counselor Rob Consalvo agreed to play the “stage manager” role for our poster.

Marietta Phinney, founder of the RTWBoston, hooked us up our location through Richard Ferzoco, who has been the pharmacist and owner of the Hyde Park Pharmacy, the old style drug store and lunch counter, since the 1950’s.

Lee brought in some excellent period costumes for us.

With that info in hand, I did a location scout about a week before the Our Town Poster Production shoot, to plan out staging, lighting and see just how much those aluminum walls were going to cause trouble.

As it turns out, they were both a blessing and a curse, reflecting everything in the room but also giving us an incredible bounce for lighting outside of the scene.

One panel had to be totally retouched in the final image, as I discovered I had created a blurry self portrait over David’s left shoulder.

On the day of the shoot, because of our preshoot scout and planning, we had allowed for about an hour of set up before the Counselor was to show up.

We used every bit of that time to evolve the lighting plan from the theoretical, living on paper, into the real world, with a warm, homey old time glow. When Rob Consalvo walked into the shop, we had him in costume, over to Ruah Bella for makeup and on set in record time. He had another event to go to and, while he was extremely gracious about it, I didn’t want to make him late.

We got the emotion going on set, fired off a bunch of frames, and wrapped up the shoot in time to get him to his next appointment.

Of course, the evolution didn’t stop there. While we had originally created a Saturday Evening Post style layout, we ended up modifying several parts of it to meet contractual obligations for the licensing of the script to the theater.

Several years ago, my family and I visited the Original Norman Rockwell Museum, up in Vermont.

It was fascinating to see the different studies he would create before committing to the final, iconic canvas.

His paintings evolved, too! 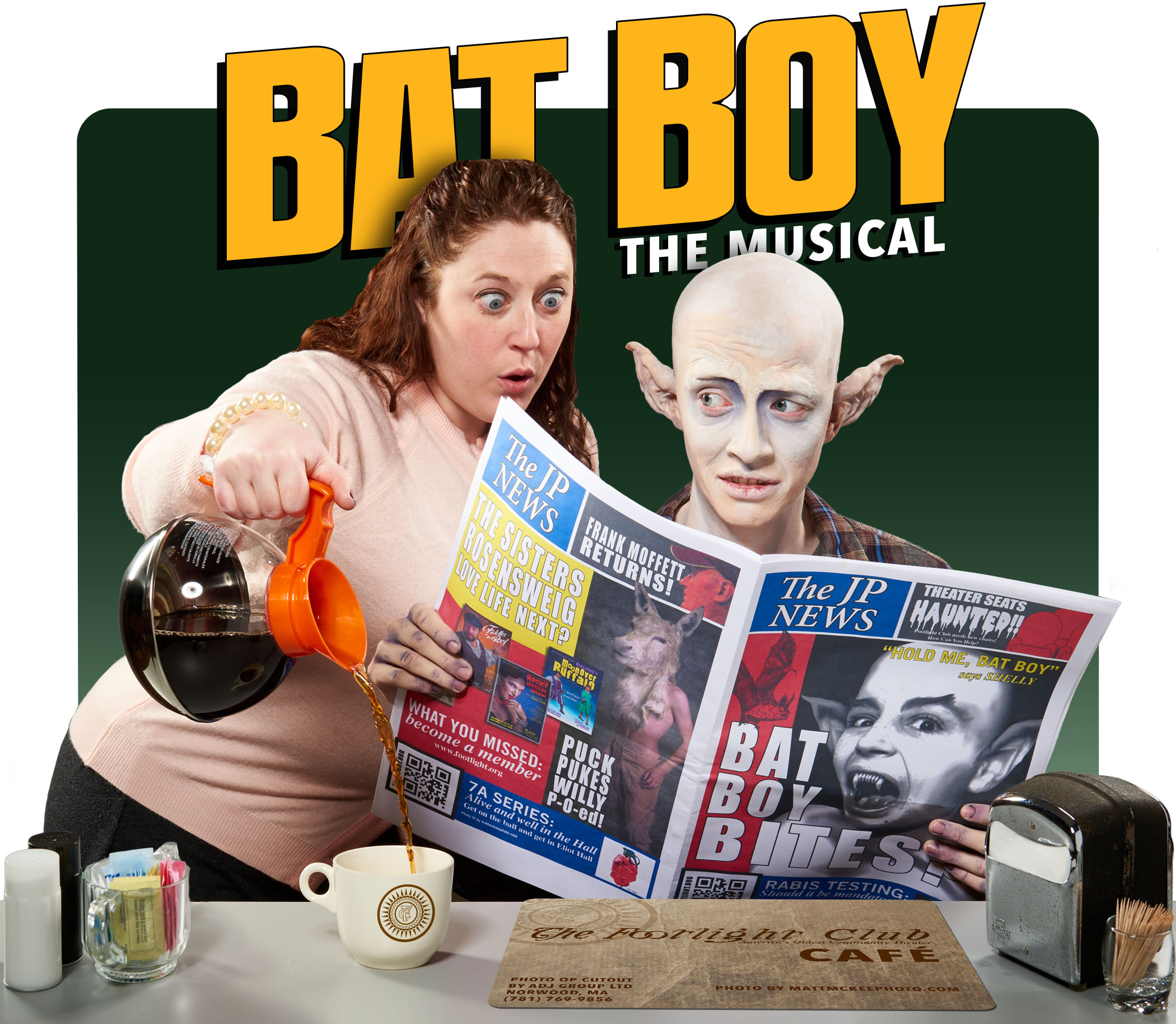 Bat Boy Behind the Scenes on the photoshoot for the poster. There's a great short video of the project as well.

An indy film poster for Saint John the Divine in Iowa 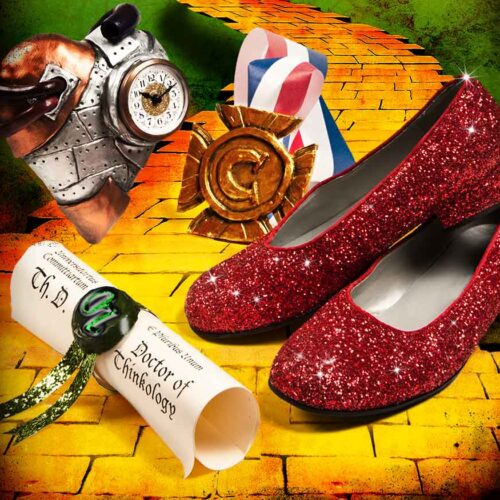 The Wiz of Oz – On Still Life and Composites

Over coming the unique challenges that we faced when creating the Wizard of Oz poster for RTW Boston.

Nick and Jillian: Steampunk Portraits at the Studio

More Steampunk Portraits in the Studio