The Glass Menagerie by Tennessee Williams The Footlight Club runs a little side program called Series Seven A for directors and people who want to put on shows in their Parker Room, downstairs. It is a little publicized program but has presented some great productions. The last time I got involved was creating a photo composite for a digital poster to promote Carson Kreitzer’s Freak Show, directed by Brian Moyer.

This time, Bill Doscher came to me to talk about the classic Tennessee Williams play, The Glass Menagerie. It had been years since I had seen the play put on, so I had to go back and do a little research. Most of the other posters I saw featured the unicorn but didn’t really involve the cast at all. I thought I would approach it a little different, since the actors are really what is going to sell this production.

Unfortunately, one of the actors had to withdraw from the play, on the morning of the shoot. So, we had to re work our layout a bit to feature Laura (Alexandra Harrington) and Tom (Jason Tennis). It still fits the story line, since the play is really Tom remembering his past.

It was great to work with this group again. I knew Bill from past posters, including our most recent collaboration on photography for the Rent poster. Jason and I met on the Pillowman poster shoot (there’s a behind the scenes video of the shoot). And, Catherine Moniz, our makeup artist, has collaborated on numerous Footlight Club posters. It was the first shoot for Alexandra and I, but I look forward to working with her in the future! 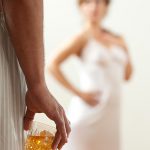 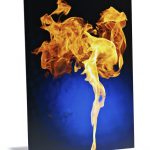