Welcome to the end of 2022 and our 23rd annual Studio Holiday Card shoot! This year it’s an existential holiday card!

Wow. Another year in the books and we are getting back to, well, a new version of normal.

My boys, once again, humored their “Ole Man” and threw around ideas for this year’s book cover.

We came up with getting back to danger and adventure, and tossed in a little quantum philosophy, to show their own growing sophistication. 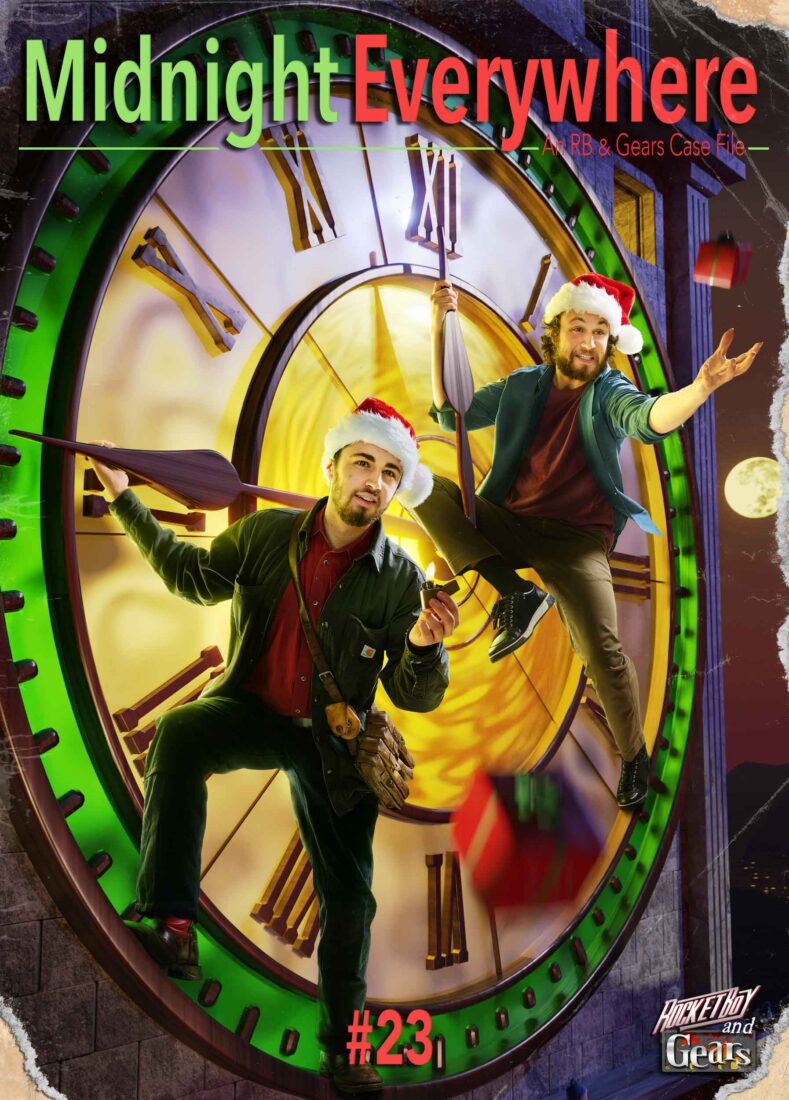 Of course, we had to keep to the Hardy Boys Adventures theme, too!

I hope you enjoy it and I look forward to working with you all in 2023.

Happy Holidays to you all, however you choose to celebrate the season.

We, at McKee Photography, want to wish you a warm, safe, happy, and above all, healthy holiday season. 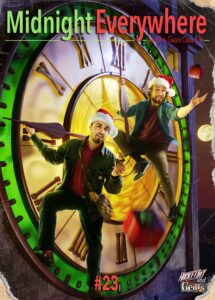 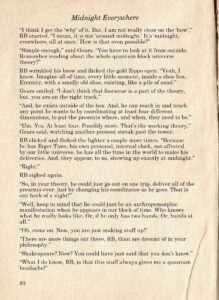 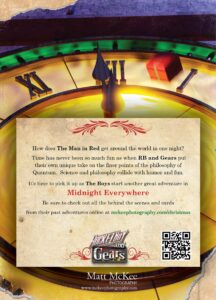 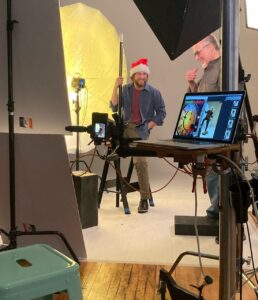 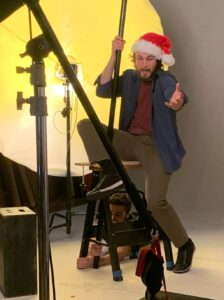 From the inside of the card:

“Simple enough,” said Gears. “You have to look at it from outside. Remember reading about the whole quantum block universe theory?”

RB wrinkled his brow and flicked the gold Zippo open. “Yeah, I know. Imagine all of time, every little moment, inside a shoe box. Eternity, with a smelly old shoe, existing, like a pile of sand.”

Gears smiled. “I don’t think that footwear is a part of the theory, but, you are on the right track.”

“And, he exists outside of the box. And, he can reach in and touch any point he wants to by coordinating at least four different dimensions, to put the presents where, and when, they need to be.”

RB clicked and flicked the lighter a couple more times. “Because he has Eiger Time, his own personal, internal clock, not affected by our little universe, he has all the time in the world to make his deliveries. And, they appear, to us, showing up exactly at midnight.”

“So, in your theory, he could just go out on one trip, deliver all of the presents ever, just by changing his coordinates as he goes. That is one heck of a night!”

“Well, keep in mind that he could just be an anthropomorphic manifestation when he appears in our block of time. Who knows what he really looks like. Or, if he only has two hands. Or, hands at all.”

“There are more things out there, RB, than are dreamt of in your philosophy.”

“Shakespeare? Now? You could have just said that you don’t know.”

“What I do know, RB, is that this stuff always gives me a quantum headache!”

Check out all of the RB&G Studio Cards!
Scroll for RB & G FAQ

Wishing you and yours a very Happy Holiday Season!

While prepping for this year’s photo shoot, I listened to Adam Conover’s Factually! podcast, specifically  Existential Physics with Sabine Hossenfelder.

And, Arthur C. Clark’s quote, “Any sufficiently advanced technology is indistinguishable from magic” came to mind.

So, I told the boys that they were going to have an existential conversation, on a clock tower face (see Harold Lloyd’s Safety Last classic from 1923), while presents magically appeared and sleeted by.

They said, “Yep. Sounds about right. When are we shooting it?”

Disclaimer: I have no idea if this is really how the Man in Red works. Nor, do I truly understand the theory of the Block Universe.

So. Any errors in the text are purely my own. But, I think I am close to right and, since it is philosophy, heck, close enough is good for starting an argument over a couple of drinks, right?

How We Make The Studio Holiday Cards

Where do you get those stories from?

Every picture tells a story. But, that story has to come from somewhere, right?

This year, as you can see from the note above, the existential holiday card started with a podcast.

We usually start brainstorming a scene that we think will be visually interesting. Through that process, the story of the book comes out.

Sometimes, it is really dark, too! The Candi Canes story started with Santa’s illegitimate daughter having an addiction to candy canes.

We, ah, dialed that back a bit.

Then, after spending time editing the picture, I start writing as if I was an author. No, I am not an author.

At least, not yet.

But, I do my best and plunk down an action scene, as if it was a page from the middle of the book.

Oh, and one rule is that one of the characters has to make a bad joke at the bottom of the page. 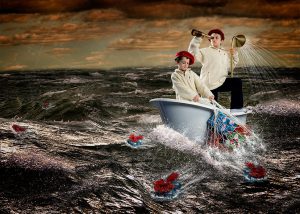 How did this holiday photo series get started?

When Gears, er… Hunter, our oldest, was born, we wanted to create a photo studio holiday card to send to family, friends and clients.

However, I was not a fan, creatively speaking, of the standard generic family portrait. So, my wife and I collaborated to create something a little more interesting. It kind of snowballed into … well… photography, photoshop and general mayhem

And, has continued to snowball for the last 20+ years…

My favorite comment was from my young second cousin. She mentioned how much she loved seeing the cards every year. And, that she really wanted to read the “books”! 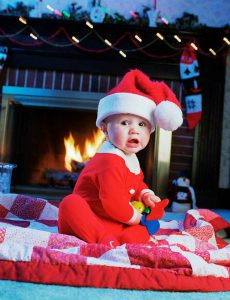 Your concepts are weird! How long does it take?

Yes. I have heard that before. (Thanks, Aunt Peggy!)

In the beginning, it was just my wife and I spitballing ideas and trying to figure out how to show people how the boys have grown and give me an opportunity to show off my retouching/compositing skills.

Now, however, the planning process for the photo studio holiday card usually starts with pitch meetings in the first quarter, followed by various updates.

Such as: “Wouldn’t it be cool to do it in a library that could be attached to last year’s office? What would that look like?” 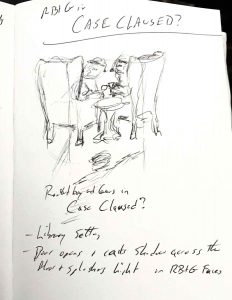 What is the inspiration for the series?

When my wife and I were growing up, The Hardy Boys Mysteries and Nancy Drew Mysteries were always on our respective reading lists. And, I was always excited when I saw a collection of those books lined up on a bookshelf. To this day, that still gives me a thrill.

When the Rocketboy and Gears concept really gained steam for us, those book covers, which have shown up as excellent memes now, became a touchstone for our creative process. 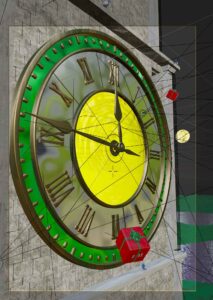 How do you photograph these set ups?

When my wife and I were growing up, The Hardy Boys Mysteries and Nancy Drew Mysteries were always on our respective reading lists. And, I was always excited when I saw a collection of those books lined up on a bookshelf. To this day, that still gives me a thrill.

When the Rocketboy and Gears concept really gained steam for us, those book covers, which have shown up as excellent memes now, became a touchstone for our creative process. 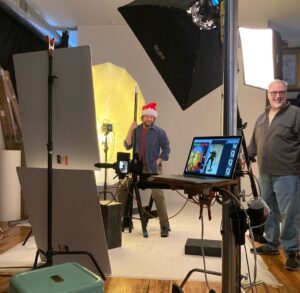 How has the process changed over 23 years?

In the beginning, we were shooting film and scanning the image for some retouching. Nothing too serious.

Then, with digital cameras, we got much heavier into compositing.

The last few years, we brought heavy duty cgi, through the magic of Blender, to the party. That is when the sets got a lot more minimal and the worlds got much bigger.

How long are you going to do this?

That is an excellent question! We have out grown the cute little boys battling the giant robot. We are even starting to push past the YA version.

The boys are, for the most part, out of the house and making their own lives.

It does make it much more challenging to organize the timing for both brainstorming and the actual shoot.

The short answer, for me, is that I will keep on making these holiday cards as long as my fellow collaborators want to come and play with me!

I can see, someday, in the future a few years, Rocketboy and Gears may pass on their batons to a new generation of crazy McKees… 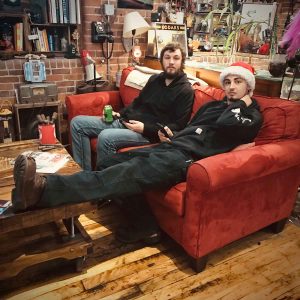 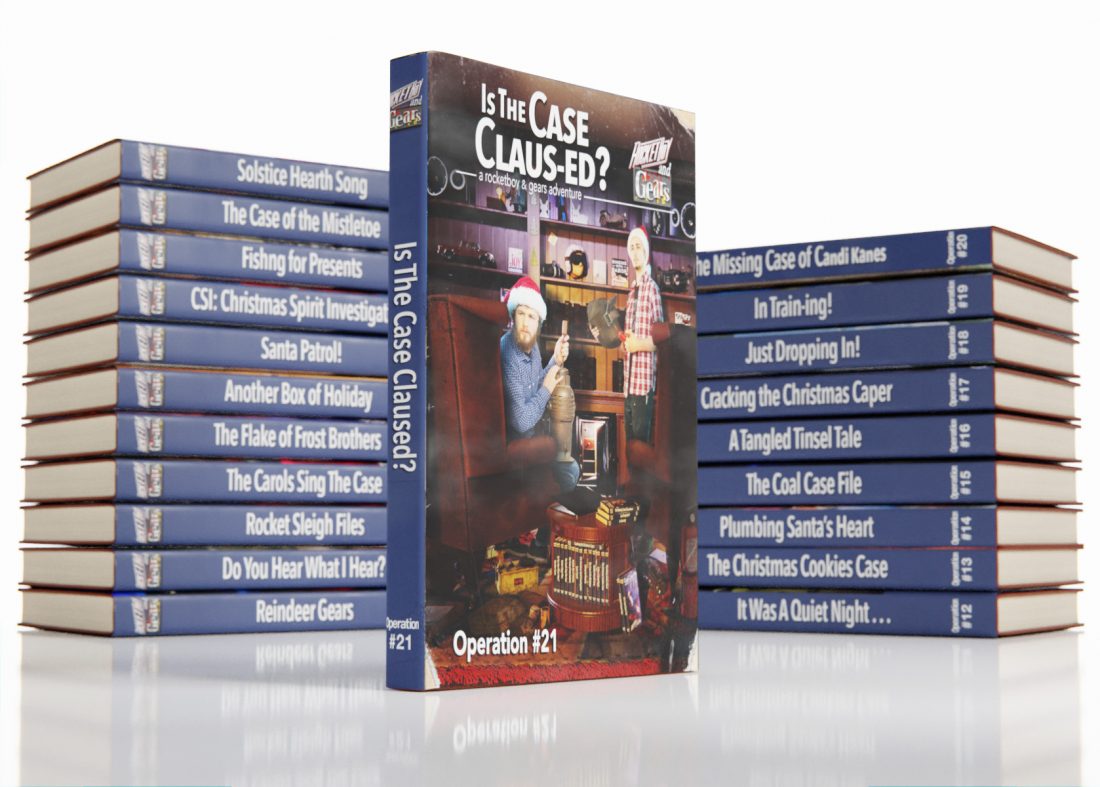 Stay Safe and Healthy out there.

The Year We Gave Away The Recipe…

Get the best Christmas Cookie recipe, along with how other cultures celebrate the season, in this post for McKeePhoto's Holiday Season Card!

Do You Hear What I Hear?

Someone is downstairs... I can hear the sound of paper on cloth and a soft, "ho, ho ho!" as if someone were chuckling under his breath. What could it be??

We created a Rocketboy and Gears Adventures Photo Studio Holiday Card to celebrate our Photo Studio abilities. Here's why and how we did it.

Merry Christmas from the Santa Patrol!

The Santa Patrol scans the skies to spot St. Nick and crew!

Read More »
Check out All the RB&G Studio Cards!